I just finished up a week long cross country adventure, taking me through shrines, sanctuaries, parks, ramen shops, food markets and culture-rich traditional neighborhoods all across Japan. Here’s a recap of everything I’ve seen, petted and tasted over the past seven days.

Nara is a small city about 40 minutes away from Osaka, and our first stop on our travels. I wrote a bit about it last week; it is famous for having the largest bronze Buddha Statue in the world.

Also an amazing sanctuary to walk around in and of course a large deer population that are totally cool hanging with their human guests. 150 Yen ($1.50) gets you five cookies and a ton of deer friends. We spent two weeks in Osaka, and on the very last day we finally got around to visiting Osaka Castle. A super impressive structure, definitely worth a visit. 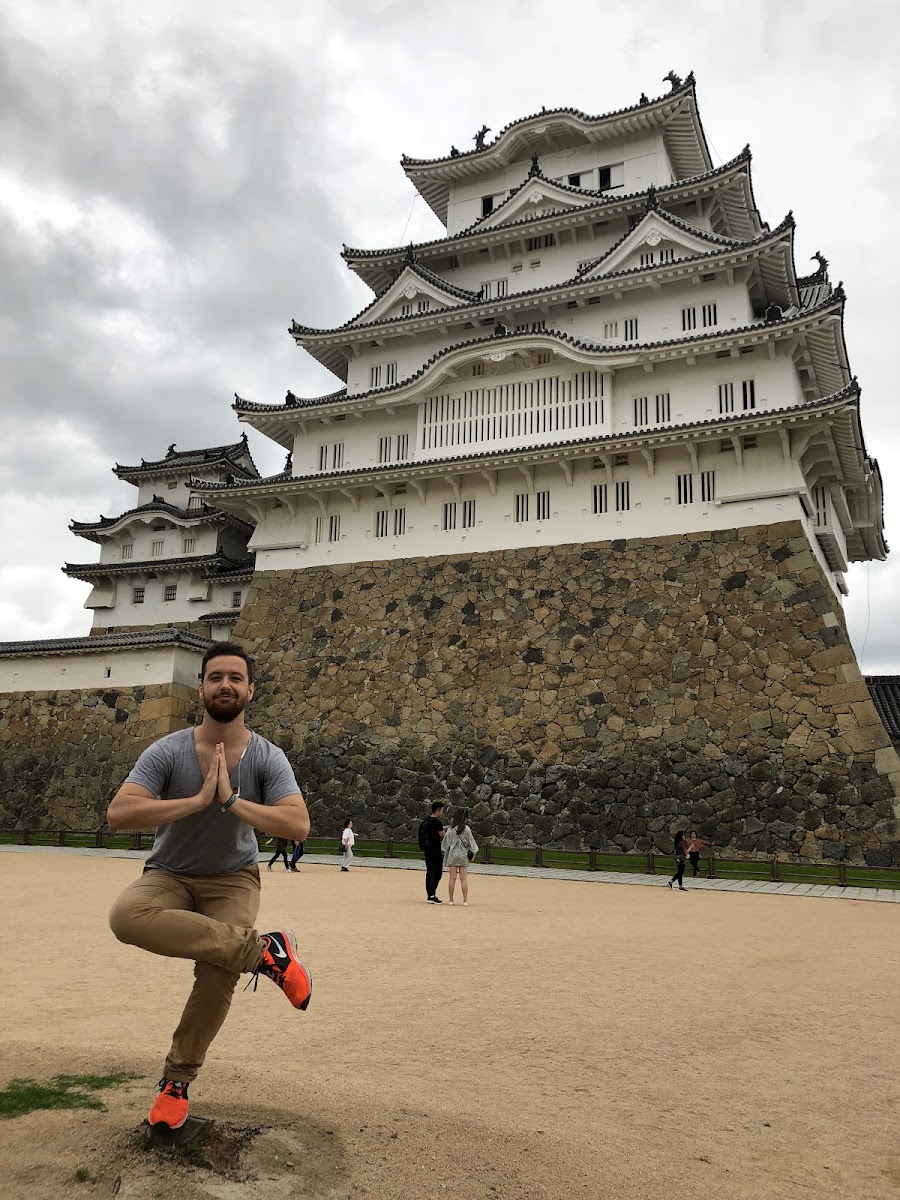 We skipped the long line to the elevator and hiked the eight flight of stairs to the top of the cast and got a panoramic view of the entirety of Osaka. We were able to see a good amount in the last 30 minutes of them being open, would have been nice to have about an hour or two for the full castle.

We also got a chance to check out the Himeji Castle. Unlike the museum-like style of the Osaka Castle, the Himeji Castle is a bit more preserved as it’s original structure and intent, so you can walk around and feel a bit more like you may have been one of the inhabitants at some point in time. 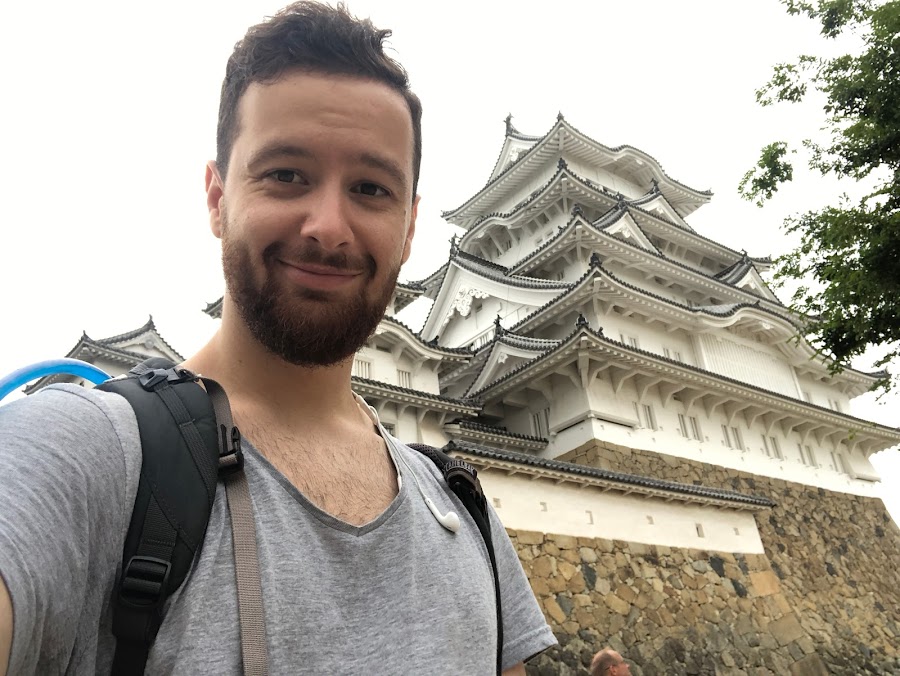 You climb these super old and steep wooden steps to get to each level of the Castle until finally getting to the top outlook. This Castle is super impressive and right outside of Osaka, I think I liked it more than the Osaka Castle.

Naoshima is an art island about three hours away from Osaka. It was our first stop on the way to Hiroshima. If you enjoy art, then this island is definitely worth a visit. The Island wasn’t crowded or over-run by tourists, but that might have been because we went when it was super rainy. You can rent a bike for 300 yen ($3) and bike around the entire island, checking out all the cool shrines, sculptures, museums and art houses.

The sculptures were a result of a collaboration between Louis Vuitton and Koshino Junko, and there are about six or seven converted houses that serve as large art installations. They ranged from edgy and pronounced displays of expression, to the subtle and profound. 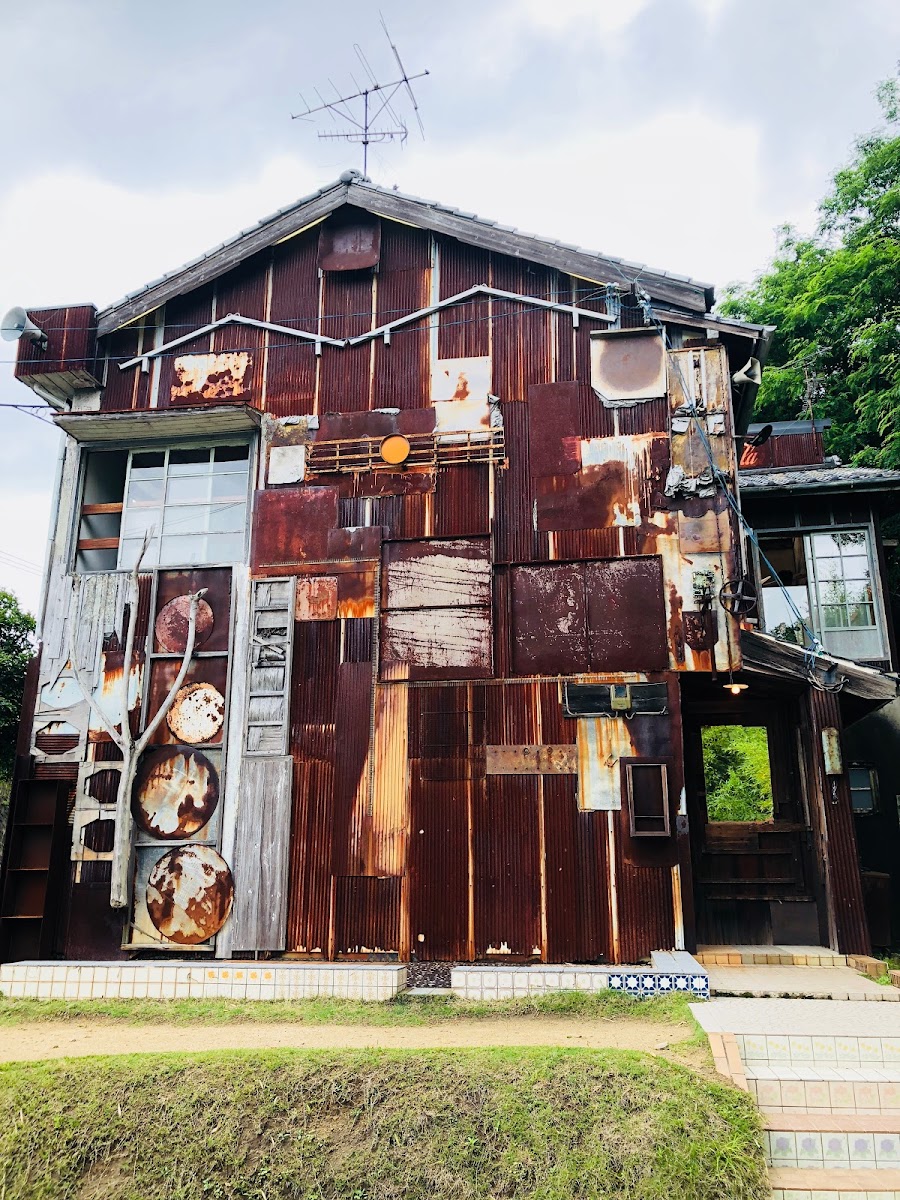 One post card-worthy sculpture is a giant yellow dotted pumpkin by the main art museum. 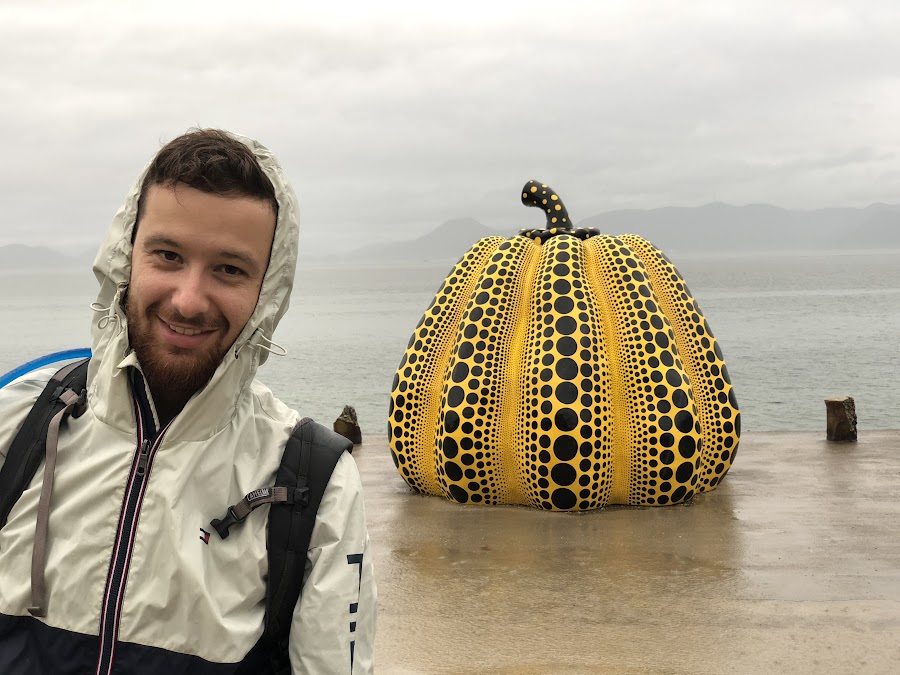 We were trying really hard to get a cool skateboard picture with the pumpkin but I think they only turned out okay.

The following day we took a train over to another island called Miyajima. This place is famous for their shrines, specifically the Itsukushima Shrine, and their oysters.

It was very expensive to book a stay on the island, so we just did an afternoon trip and walked around for a while before heading to Hiroshima. I really loved the town here, felt like a lot of the people who lived on the island knew each other and had a tight knit feel. The architecture around the shrine was incredibly beautiful, especially the sanctuaries. I felt very zen walking through the shrines and local streets. 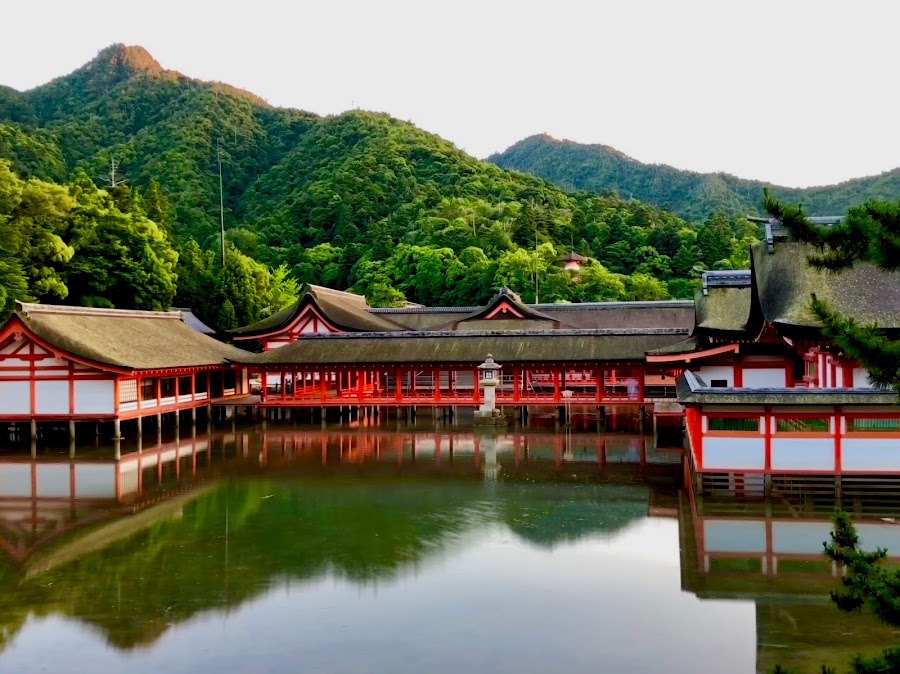 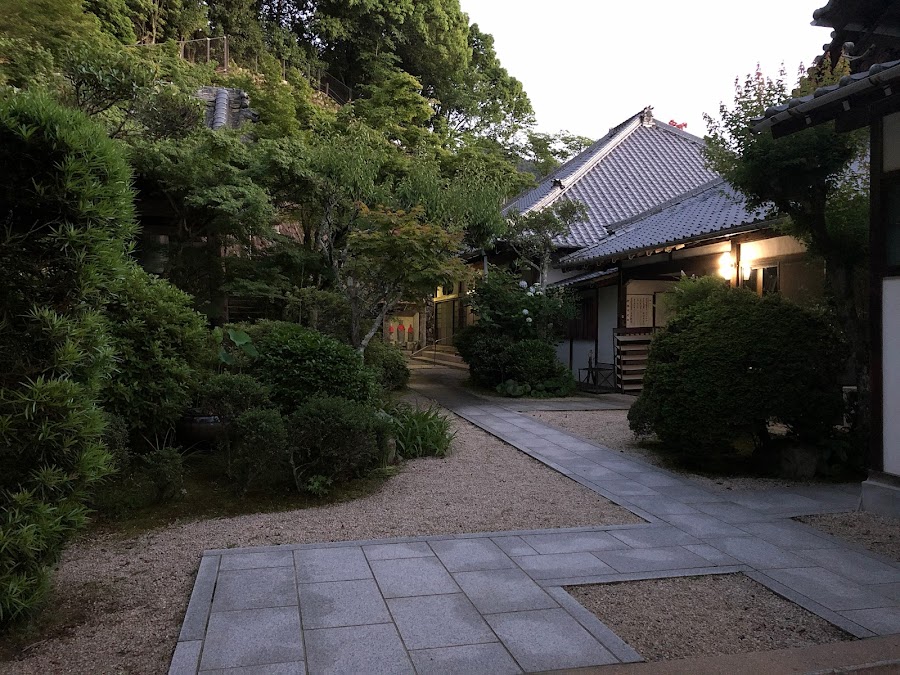 We wanted to visit Hiroshima to see the site of the Atomic Bomb dropping and the associated Museum. There was a large installation outside to signify where the bomb was dropped, one preserved building left standing as it was when the Bomb hit (one of the few that did not crumple into rubble) and a large museum that we walked through. 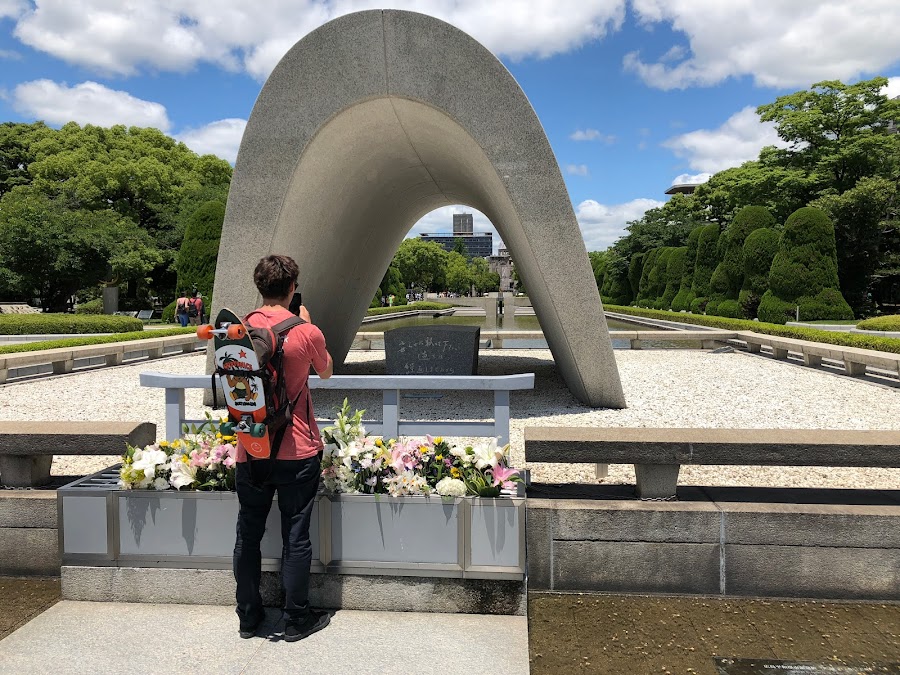 There was a lot of controversy around preserving the dome building. The citizens of Hiroshima said it constantly reminded them of the devastation and a bad memory of how the city once looked. Though ultimately it was preserved in it’s original state. I can definitely understand both sides. Destruction is an ugly thing. 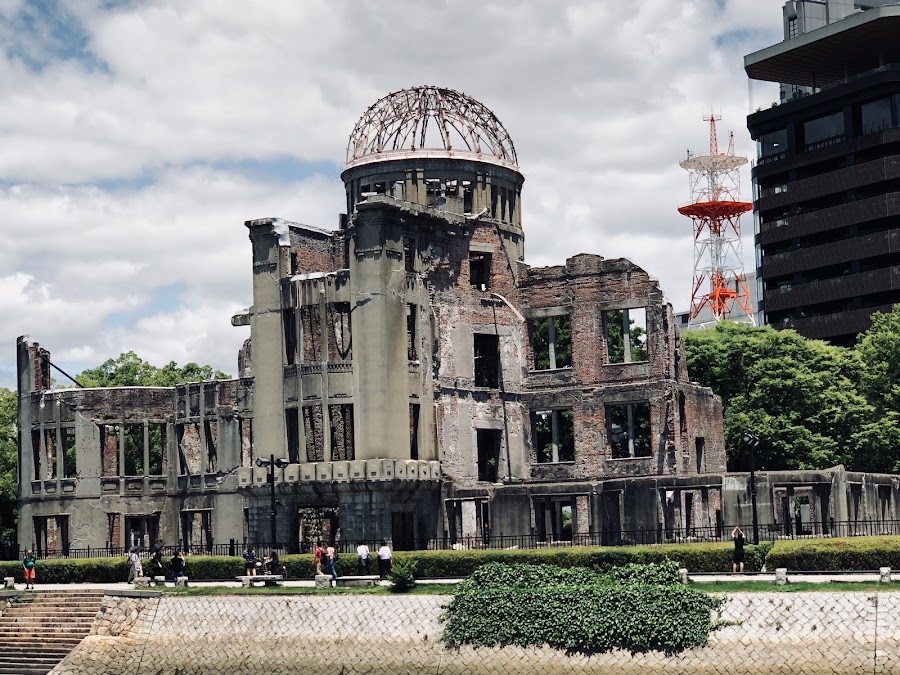 It was interesting to learn a lot about the final years of World War II and the events surrounding the dropping of the bomb, especially since we visited the Pearl Harbor museum in Honolulu two weeks prior. It felt like we got to experience both the start and end to WWII, which was a pretty profound experience I think. I also went to the Berlin Wall and a Post World War 1 into WWII museum in Germany, so it’s interesting to piece together history from so many first hand accounts from all over the world. These museums definitely create a more vivid picture of the past, and I’ve been starting to appreciate them a lot more over time. One thing that was interesting was the lack of any sort of patriotic / nationalistic overtone in the Hiroshima museum. It did not vilify the U.S in any way, but mainly focused on the facts and history of war and the devastation of a nuclear bomb. The museum covered a lot of history around bomb development across the world during that time, not just the Hiroshima bomb. The rest of the city did not have too much appeal to us, so after the museum we decided to head on our way to Kanagawa.

Kanazawa was our next stop on the itinerary. The city was fairly easy to navigate and not too spread out — we were able to get around entirely on skateboards. The two coolest things we checked out here was the enormous park and beautiful garden, and the geisha village.

We didn’t see any geisha, but got some soft serve green tea ice cream and biked around a bit. 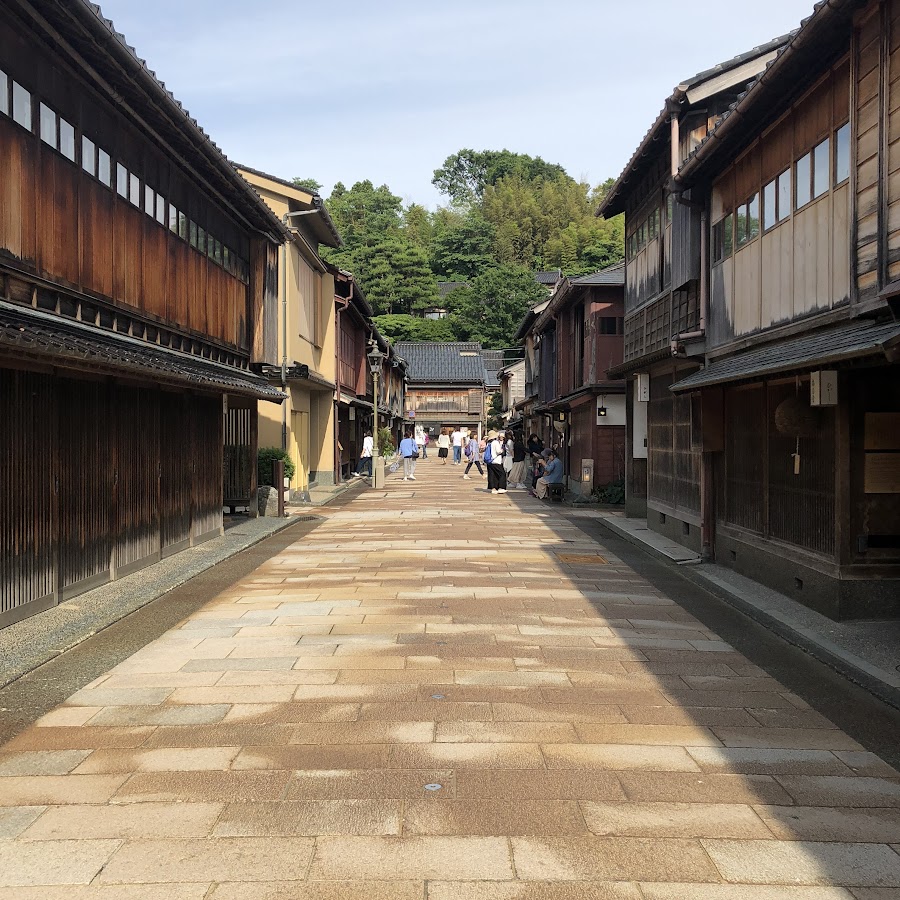 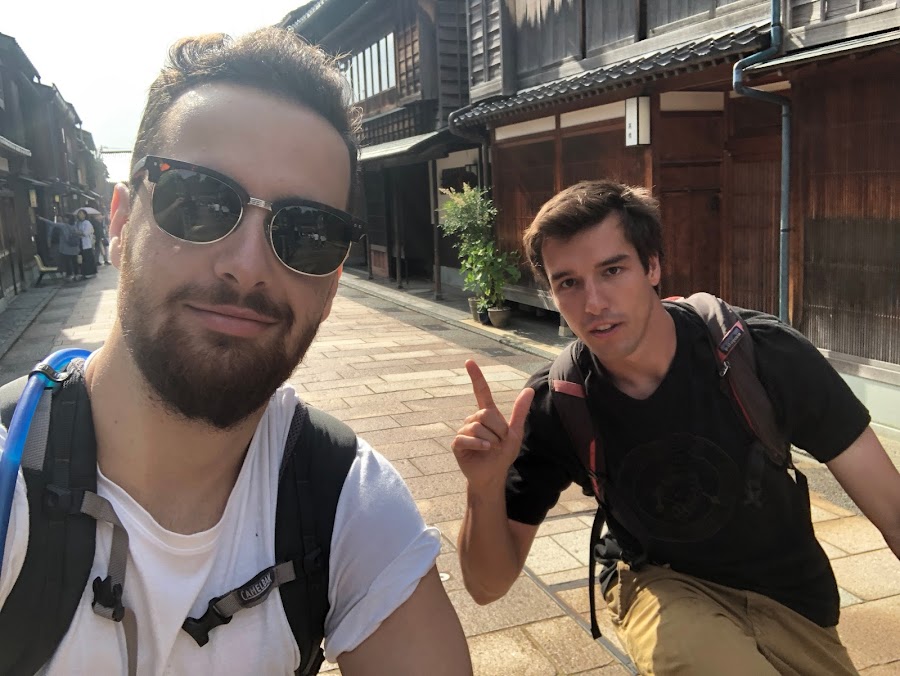 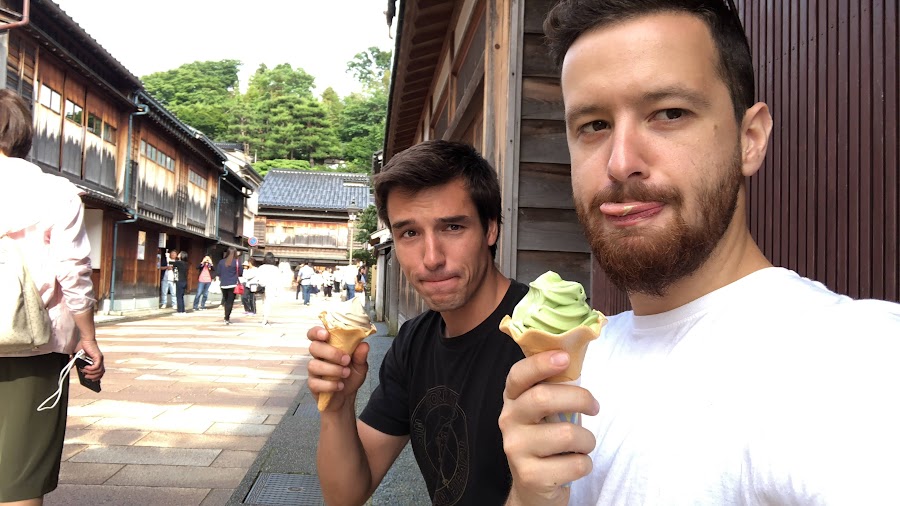 Takayama was probably one of my favorite cities to visit. We stayed at an amazing hostel called “Good Neighbors Hostel”, had some great sake both at this cool bar called Red Hill Inn and in the old-town part of the city. 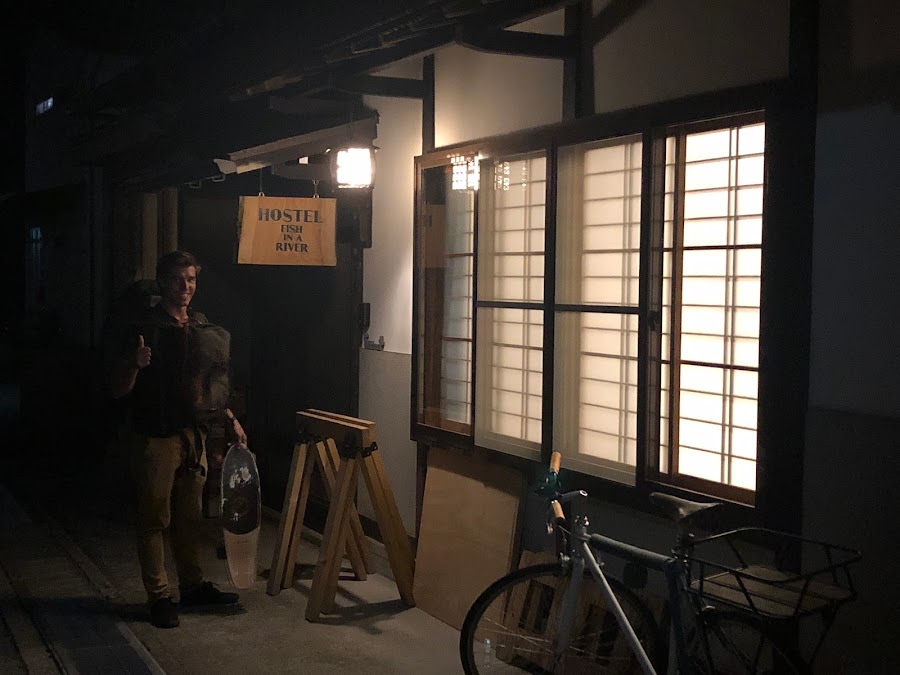 Most of our time spent in Takayama was skateboarding and walking through the older part of town which was full of dark wooden shops and restaurants lining the streets. The old-style japanese architecture here was incredible. We also ate some cool things like quail egg beef tartar sushi and had a fancy wagyu beef lunch. 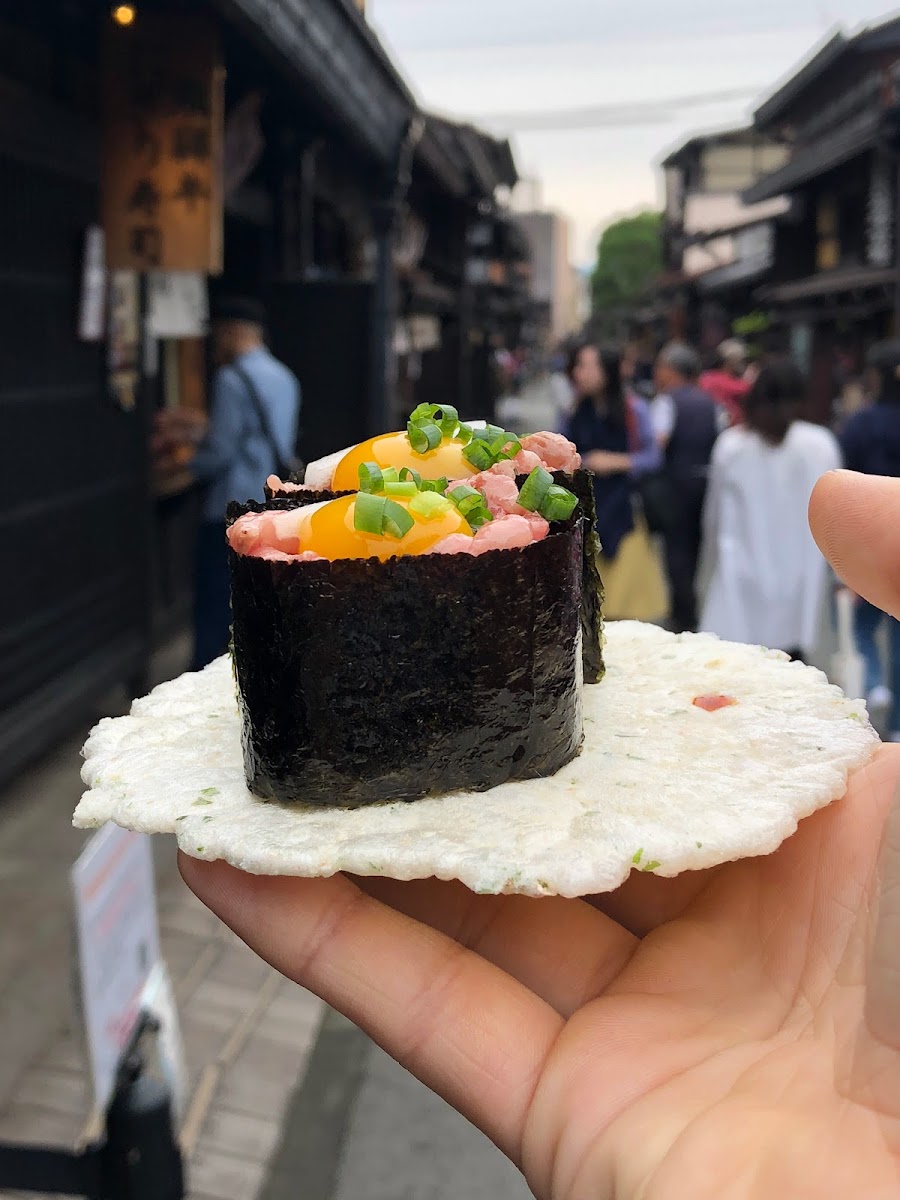 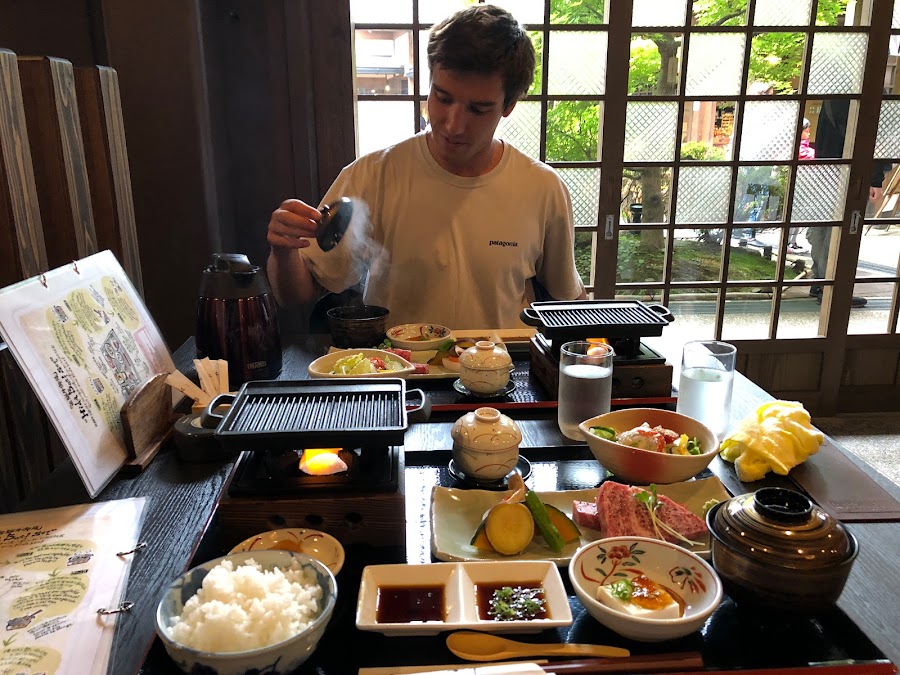 We also visited this ancient Japanese Village from maybe hundreds of years ago where they would produce silk from silk worms and farm and what not. We didn’t have a tour guide for this one so it was mostly just observing what village life might have been for the japanese hundreds of years ago.

We had one more day on our seven day pass and had just arrived in Tokyo. To save money on a hostel, we decided to store our bags in a locker at the Tokyo Station, go out for a night and then take the first bullet train in the morning to the furthest destination we can. Turns out that was Hokkaido, about six hours away. We had the “Green Car” tickets, which offers super comfortable reclining seats for only a hundred dollars more, so sleeping on the train was pretty comfortable. We woke up around 11am in Hakodate, grabbed some crab donburi from the local fish market then went over to the observatory on the top of the Hakodate mountain to get a good view of the city. 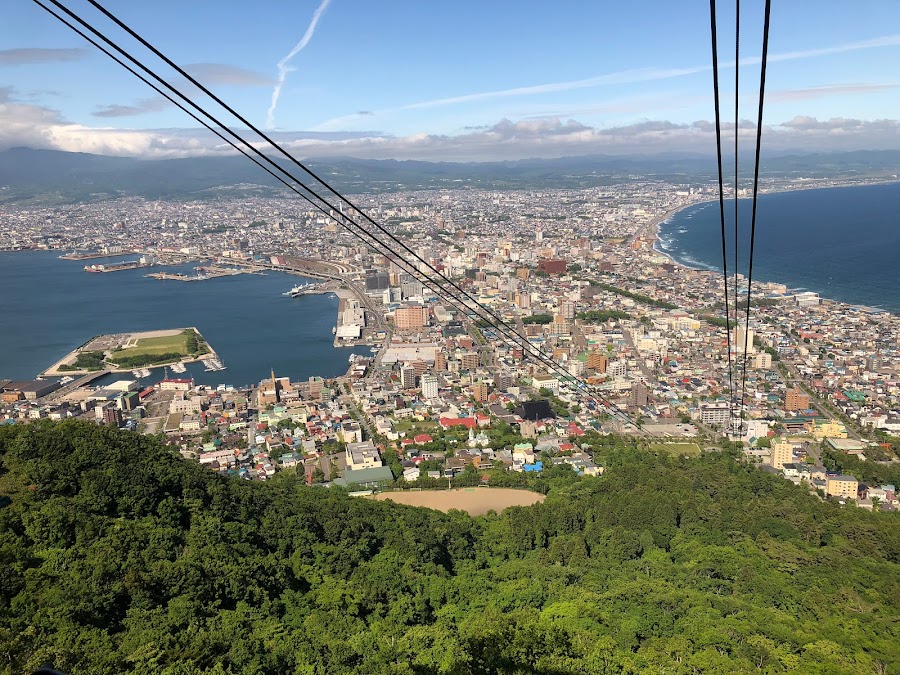 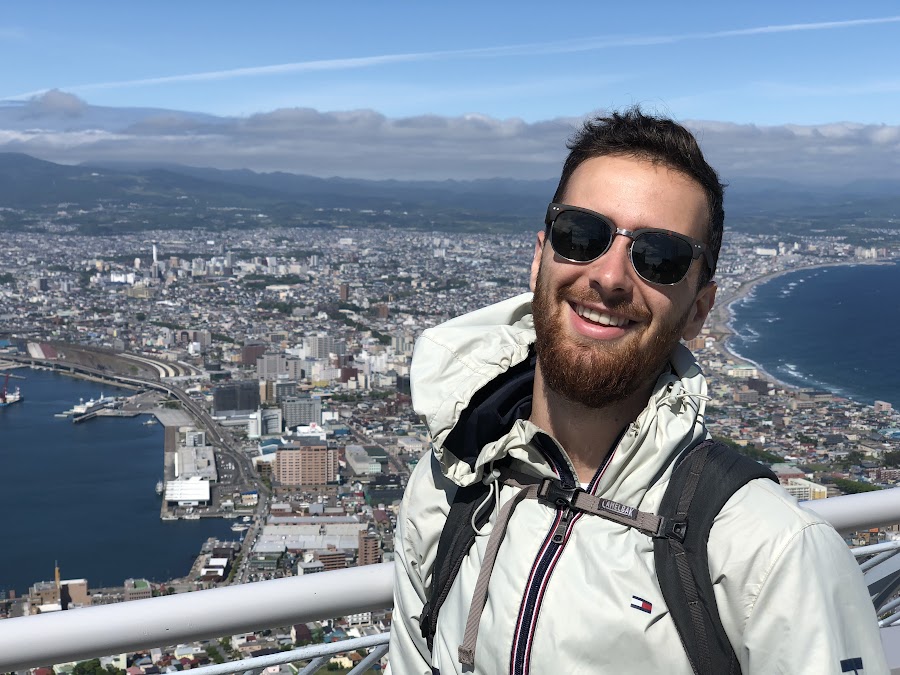 Four hours later we hopped back on the train, took another few-hour nap and woke back up in Tokyo. Hakodate wasn’t too incredible of a city — an alternative path would have been to continue on to Sapporo after grabbing something from the fish market and checking out the Hakodate Observatory. We already did Sapporo last year, and Andrew (Takao) had just flown into Japan so we wanted to meet up with him back in Tokyo. He’s from Yokohama, so we’re staying with him and his dad for a few days.

It’s been super great hanging out in Yokohama. It’s always really nice to have a good suburban house to stay in, home cooked meals and a small slice of normal life for a bit. We went surfing at a nearby beach, went to a batting range, ate out at an awesome hibachi-grill style Japanese restaurant Andrew’s dad knew of, had pancakes for breakfast, played guitar in the living room. We’ll be in Yokohama for a few more days before heading back to Tokyo. 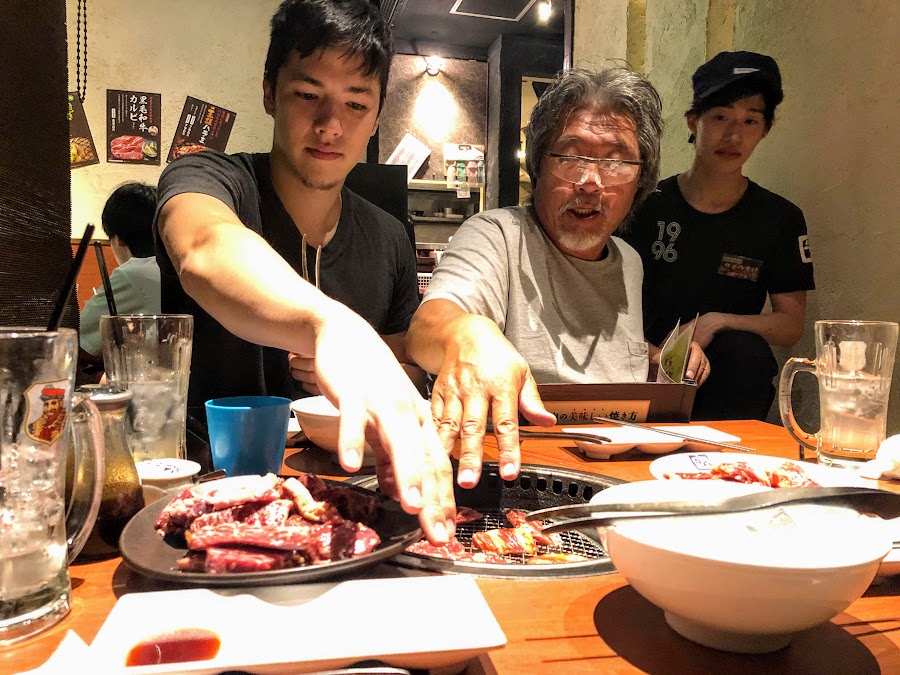 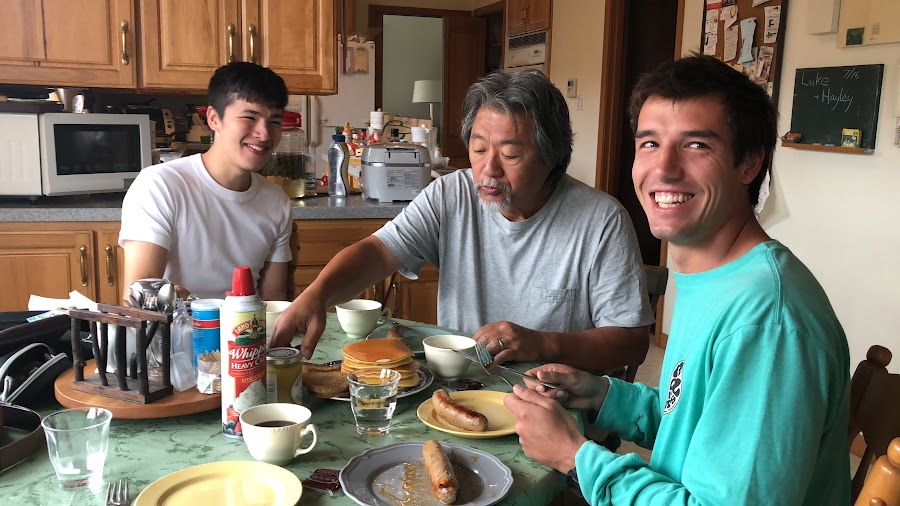 Phew! I think that covers most of it. Until next week!