Week 23: Last week in Japan with the Andrews

I’m hanging out in Yokohama at the moment, watching some TV with Andrew Takao and his dad Hiroshi in their suburban home. Andrew (Wilson) flew out yesterday, making his way to Southeast Asia. I’m guessing he’s somewhere in Bangkok at the moment.

We spent the first half of the week in Yokohama. It was really nice to hang around at ‘home’, play some guitar, eat home cooked meals, work on the dining room table. We went out to downtown Yokohama a few times, which is a smaller and more manageable version of Tokyo. It’s a good city to settle down in — not as crazy as Tokyo but still has some cool shops, great restaurants and I’m sure more than a few things to do.

On Thursday we all left Yokohama to go to Venture Cafe Tokyo. This is the same organization that I’ve been involved in at Boston, but this branch just opened two months ago. When you first walk into Venture Cafe you print your name tag which tracks your visits. I’m at 57, Andrew is at 80. It was funny because the most anyone could have is like 12 (most everyone had 1-5), so we got some great reactions when some of the ‘regulars’ saw our number.

Back when I was in Boston, Lia, a Japan - Boston liaison from Cambridge CIC, had introduced me to the manager of Venture Cafe Tokyo (Takuo). Takuo ended up finding me at the event and introduced me to the entire staff. There seemed to be a Japanese counterpart for each staff member in Boston. We stayed after with them and the director treated all of us to a catered dinner. It was interesting to hear about the budding entrepreneurship community in Japan. They face some unique challenges, especially around the cultural significance of ‘failure’. In US, failure isn’t viewed as a shameful thing, but more as a learning experience and sometimes even a necessary part of development. In Japan, being known for failing at something is pretty damaging to your reputation, which makes a lot of thoughtful innovators are apprehensive on the risk of a startup. 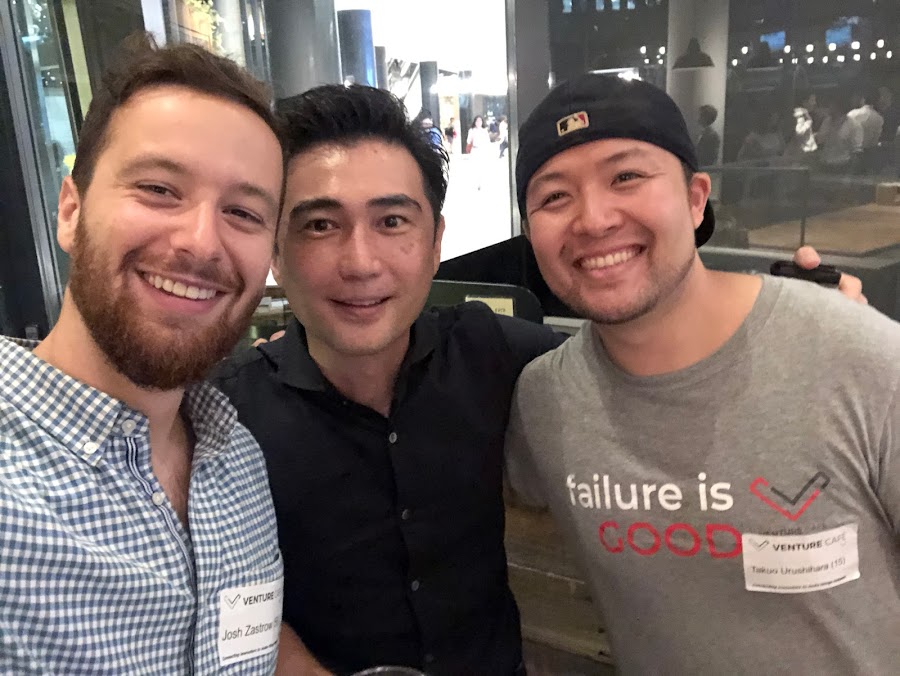 On Friday Wilson and I checked out the Golden Gai. This is a famous little neighborhood in downtown Shinjuku filled with tiny, eclectic bars. Each bar is uniquely styled and seats only six or so customers. The intimacy of these bars helps you make very close friends with the other patrons. I picked one and spent the night there, Andrew joined me a little later. We met some locals from Shinjuku, a couple groups of American travelers, a business owner and of course the friendly bartender Ai.

On Saturday we celebrated Andrew Takao’s birthday. We met Andrew and his dad by Shinjuku and grabbed some coffee and walked around a bit. We went to a super hi-tech air conditioner store that looked exactly like a progressive insurance commercial. They had a 3D movie theater that describes with Blockbuster cinematic quality how their air conditioners work. The A/C tech was actually pretty impressive. Somewhere out there is a Japanese Engineer deeply passionate about air conditioning.

Afterwards we went to a VR arcade and played Super Mario Kart VR (which was incredible!) and a horror VR game where you are in a wheelchair trying to get out of a hospital full of bloodthirsty killers and of course all you have is a flashlight. It was scary as promised.

That night we grabbed some beers from a local convenience store, Family Mart, and hung out in the main downtown area and talked while people watching. A few locals came over and joined us for a drink, picking up their own refreshments from Family Mart. We snapped a few group selfies. 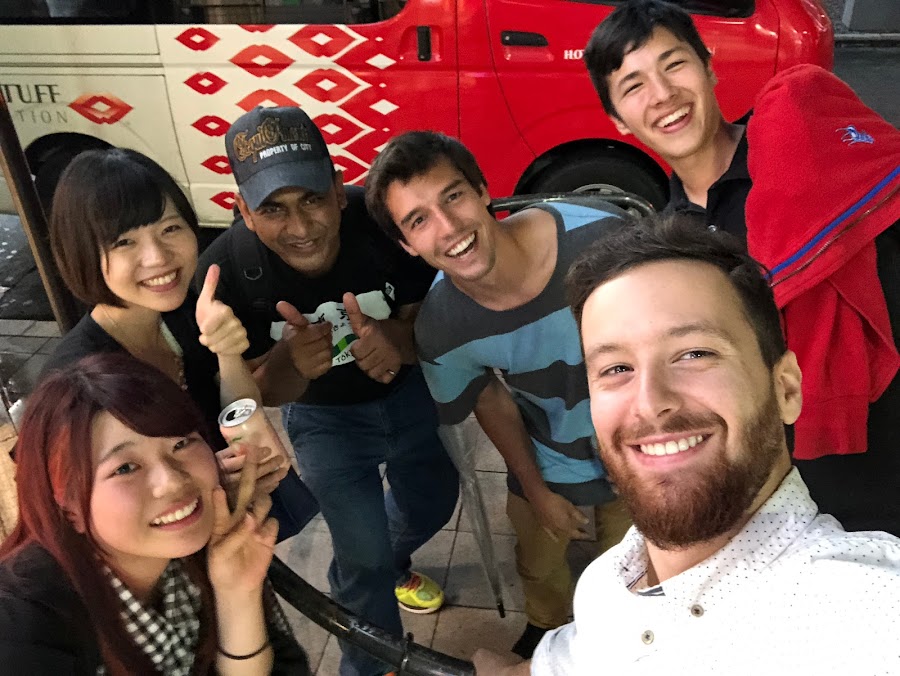 We eventually parted ways with them and went to play pool at a billiard bar across the street. Midnight was rolling around, so we caught one of the last trains to a dance hall called Circus. We stayed there for short while but ended up leaving to take a walking tour through Shibuya. We stopped by a couple childhood spots of Takao’s and talked about life and what not. As the trains started up again, Andrew Takao caught one to Yokohoma, then a few hours later Andrew Wilson caught one to the airport and I stuck around Tokyo for another day.

This upcoming week I’ll be doing mostly the same, hanging out in Yokohama then heading into Tokyo for the weekend. Starting to feel like I should fly out of here… but to where I am not sure.

See you next week.