Or Swa-dee-cap as it’s pronounced in Thai. At the moment I am sitting on a bean bag chair at a hostel in downtown Bangkok. I was beginning to feel a bit restless in Japan, so I decided to fly out. I think I was in need of healthier food options and an outlet for exercise, and I figured surfing would do me some good. I’ve already done Bali, and Vietnam is a current no-go due to data restrictions with some of the work I’m doing, so I decided I’m going to head to Kata Beach in Phuket, stopping at Bangkok along the way.

I’ve spent the weekend so far in Bangkok. The memories and craziness of Bangkok all came rushing back in the moment I got into the city. The heavy, hot and damp heat of the city. The familiar twang of the thai language. The roar of traffic through the inner city roadways as scooters, tuk-tuks, taxis speed by. The fragrant scent of thai dishes, combined with the unholy mixture of urban pollution, pungent fish sauce, and sun baked food spoils assault the nostrils. Oh Bangkok.

To recap my last week of Japan:

On Sunday Tak and I stayed up to watch the Japan vs Belgium game. We went to a public viewing at the Tokyo Tower (a famous landmark that looks like an orange Eiffel Tower) where about 500 devout Japanese soccer fans were packed into a auditorium with an IMAX sized viewing screen. I mistakenly wore yellow, which is Belgiums colors. Japanese reporters came over to interview me, hoping that I would be the token Belgium guy in the sea of blue jerseys. Unfortunately I was just an American who is also rooting for the Japan team, so they lost interest pretty quickly.

Japan scored twice in a row the first half, and you could feel the energy and excitement in the room with each chant of “Nippon!” (which means Japan in Japanese). Then the palpable sadness when Belgium scoring the winning kick 30 seconds before overtime. The last call of “Nippon!” from the announcers microphone went unanswered.

I stopped by Yokohama the following evening to cook Hiroshi a nice Italian dinner. He called me on Monday wondering where I was, and if I was going to come back to Yokohama before I left Japan. I forgot I told him I would do so before leaving Japan, so I had to squeeze in one more visit. On Tuesday I met him at the station next to his clinic and we picked up ingredients. We decided to make chicken piccata, pasta carbonara and sauteed zucchini. The pancetta and fresh noodles were particularly hard to find — we had to go to three grocery stores to get all the ingredients. In the end the searching was worth it, dinner turned out really delicious. 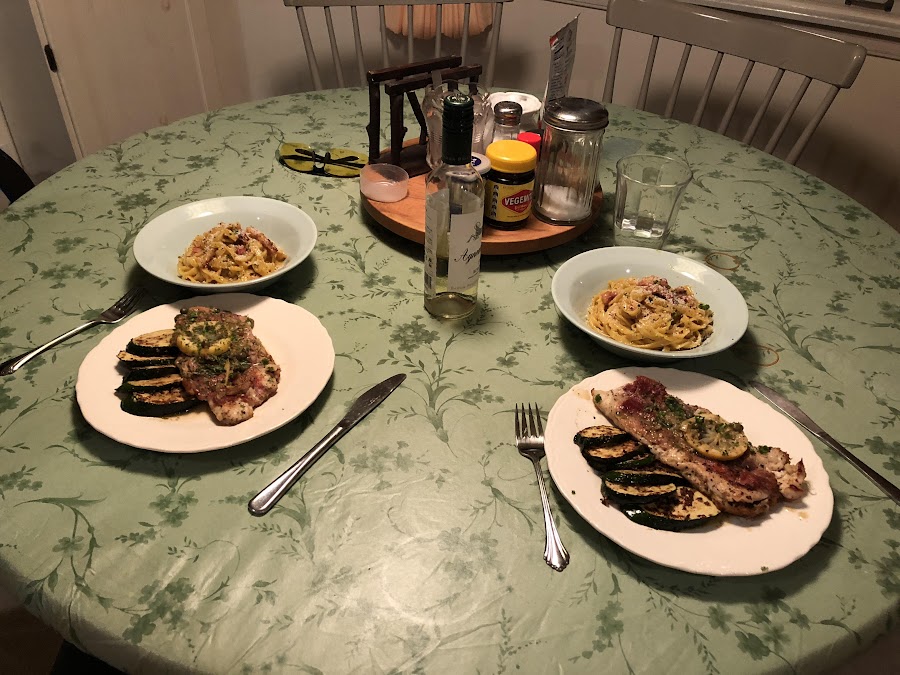 The next morning I went to Hiroshi’s work and walked over to the station to get back to Tokyo. I met up with Tak at his apartment and got settled in for work. The Azuba-juban area of Roppongi is a very westernized version of Japan. A lot of ex-pats live in the area, and the infrastructure seems to have a familiar feel to it. I ate a a 200 year old soba restaurant. The noodles came on a square bamboo mat bin, accompanied by a flavored soy suace, ground daikon, ginger and spring onion. Apparently soba noodles are very good for you — full of antioxidant rutin, very low glycemic index (so doesn’t raise blood sugar levels), contains fiber and a good source of protein. I think I’m going to incorporate soba noodles into my diet once I’m back in the states. 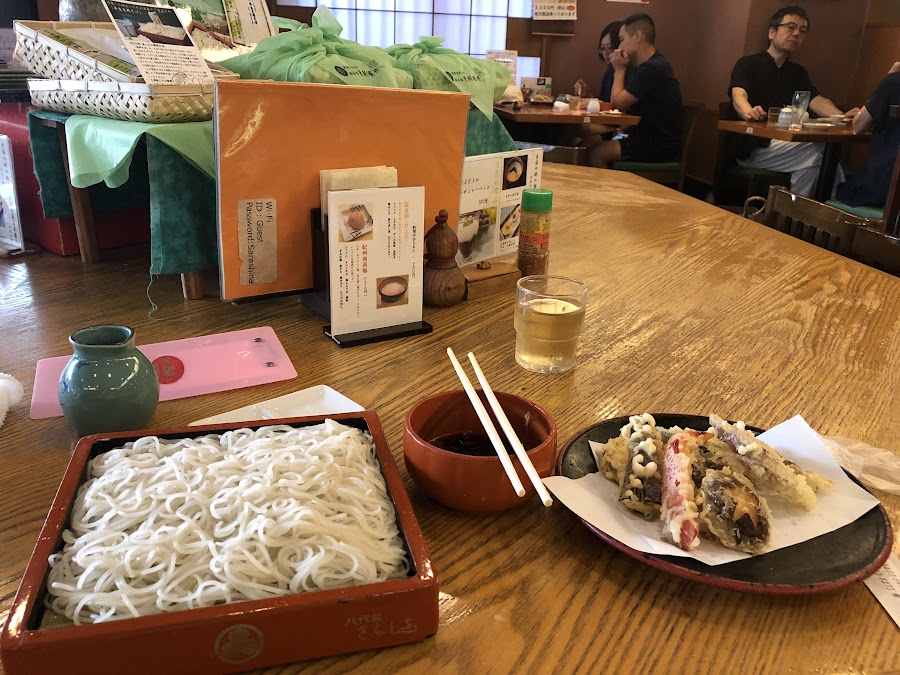 That night was 4th of July. Unfortunately there is almost no evidence of the holiday in Japan, so the day went by rather spectacularly as far as holiday standards go. I went to a grill restaurant with Tak, where we ordered probably too much food. An assortment of thinly sliced marinated steaks, mushrooms, rice, garlic, garlic rice, three different kinds of kimchii and some miso soup for the two of us. It was phenomenal. 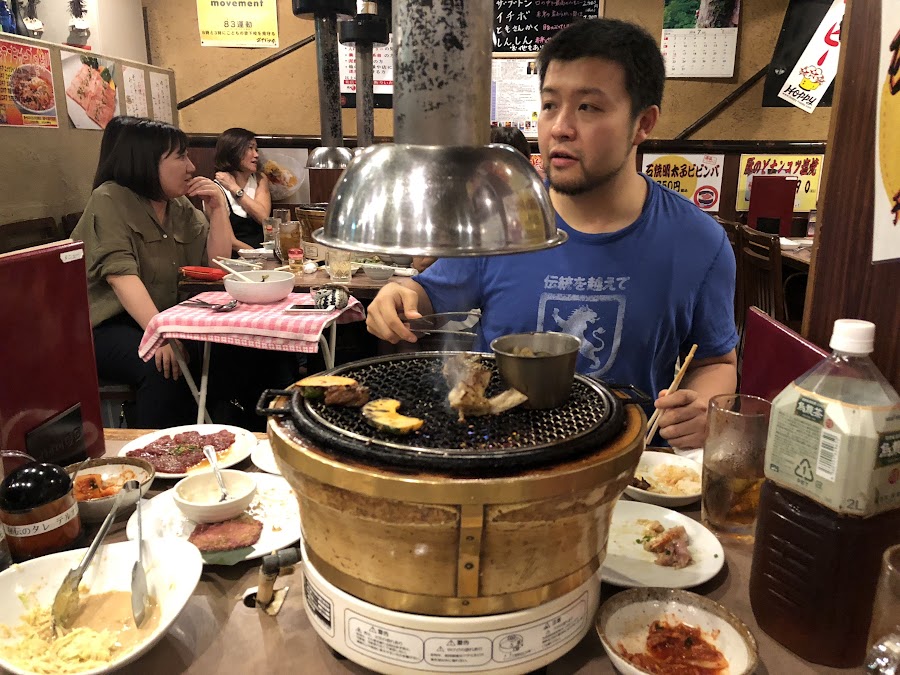 Ashley, who I met for lunch with Tatiana a week earlier, works for a club in Roppongi called One Oak that was doing a Fourth Of July celebration. I stopped by after dinner. Even though the club was all America themed, it didn’t feel quite the same as the traditional celebrations. As great as it was to see Ashley again, I was pretty full from dinner, so I went back home after a couple songs.

Thursday was my last Venture Cafe Tokyo night. I volunteered to help setup, then became bartender in one of the rooms. One of the managers from Japan’s Post Bank Investment group had come to Venture Cafe to meet me. We had a good chat on the state of Venture Capital in Japan, and I think the group is interested in investing once we have a few clients. I also met one of Tak’s friends — a video producer who helped shoot the marketing material for Venture Cafe Tokyo. We all went to an Izakaya afterwards for some Shochu and bar food. 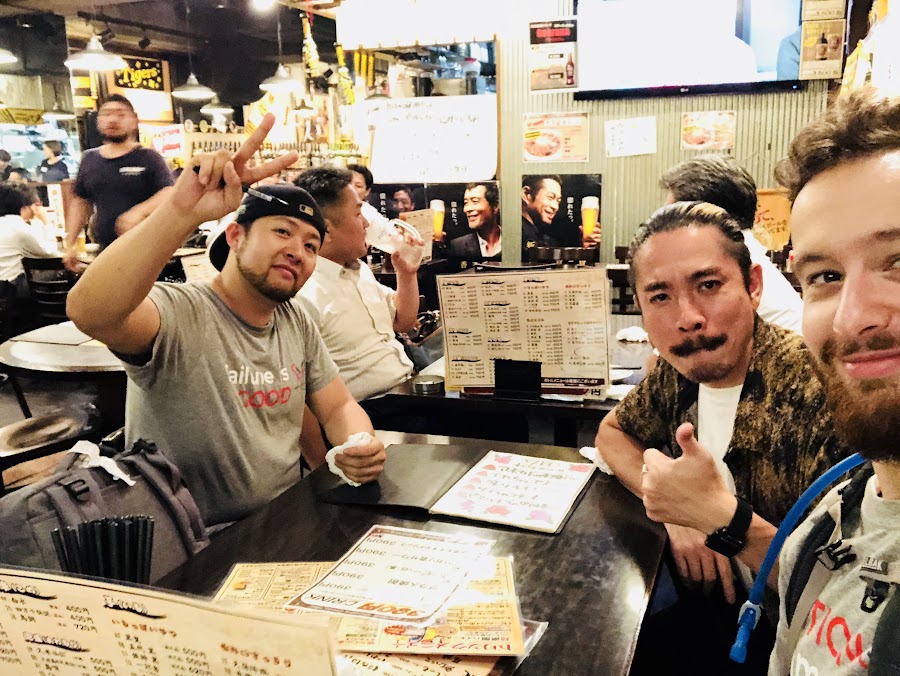 Shochu is a distilled Japanese liquor made from either potatoes, barley, rice or brown sugar. It’s usually mixed with club soda and either lemon, grapefruit or a preserved plum. I had one that came with a plum, which was not as great as I thought it would be. Mainly because the plum was preserved in a salty brine instead of a sweet syrup, which made the drink slightly salty. I think it’s an acquired taste. Around midnight we rushed over to the train station to catch the last train home. Tak and I stayed up for a while playing Super Mario Kart on his Nintendo Switch until it was finally time for bed.

The following morning (Friday) I caught a 6am train to Narita and finally left Japan. Since Thursday was spent volunteering and Friday was spent traveling, I spent most of my time in Bangkok working. I ventured out a few times to find a food market and to grab a drink in the evening, but nothing too exciting. The hostel gets food delivered from a local thai restaurant, so most of my meals have been brought over to me, and the hostel has a very fat cat that is fun to play with. I feel pretty good about how productive this weekend has been on the work front, but looking forward to tomorrow when I fly out to Phuket!

Talk to you next week.